To protect your Sydney home or business's electronic devices from the risk of damaging power surges, you can depend on a whole house surge protection solution from Omega Electrical. Read about our customer service level guarantee on this page here, and from our other delighted customers on this page here. 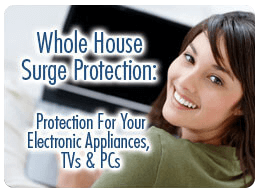 WHY PROTECT AGAINST SURGES?

Power surges can severely damage and break all types of electrical appliances with electronic circuits - from computers, to TVs, to white goods such as fridges and washing machines. In their most dramatic form surges can be caused by lightning storms, but also they can be caused by power company supply faults, and even faulty appliances within the home. One of the reasons why they can be so destructive is that they have the potential to break multiple devices and appliances at the same time - sometimes it's all of them that are effected.

THE OMEGA SOLUTION While many people may have a small plug-in protector for certain devices, Omega has a superior, cost-effective solution to protect all of your appliances. Our whole house surge protection installations are added at the switchboard panel level and carry a much higher level of protection than much smaller plug-in devices, and for the whole house at the same time.

GREAT SERVICE If you're interested in protecting all of your homes electrical and electronic devices from this common cause of damage, Omega Electrical can help with a level of friendly service that is second-to-none. We can give you a full up-front estimate, and provide on-time, satisfaction guaranteed service from Sydney's trusted licensed experts.
For all your surge protection needs in Sydney, call and speak with Omega Electrical today.

When you need an electrician in an emergency you can count on Omega Electrical. With electrical teams in multiple locations, we can dispatch our nearest available team direct to your door. Why settle for anything less?
Call 1300 463 206

When you want great service for your electrical repairs, upgrades and new installations in Sydney, you'll be delighted with the Omega Electrical commitment to provide you with the friendliest and most professional electrical experience in NSW. No other electricians go as far as Omega to put a smile on our customers' faces.

With Omega Electrical, you know the full price in advance before you give us the go-ahead. It means complete peace of mind with a single flat rate quote, rather than worrying about how long it will take. You can relax with Omega.

Omega Electrical offers our customers red carpet service - which means every customer is a VIP, and their service backed up by a satisfaction guarantee.

Our electricians are clean-cut, wear a pressed uniform, and we hire only the kind of electricians we'd be delighted to have in our own homes.

You can be sure that Omega Electrical will be there on-time - so much so that if we're late we'll pay you up to $100*.

We have teams in multiple locations across Sydney, meaning we can dispatch the closest available team direct to your door. 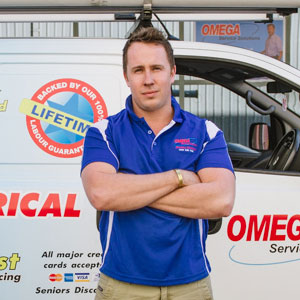 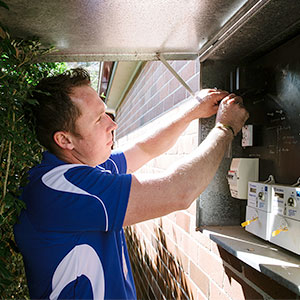